Fitness:
Before I went to Uganda, I spent five weeks without meat and lost seven pounds as a result. My month in Uganda led to the loss of another four pounds and put me at 133 pounds! The lightest I have been in about six years. After eight days back in the states, I am back to 141.

As a start to the day, I plan to do some form of exercise every morning. I hope you all will join me. Today was the first time in a long time that I went running and I did a 1.01 mile interval running situation. Basically I ran as fast as my body would allow me to, then walked and repeated. I also did two sets of the following: 25 jumping jacks, 10 crunches (plus 10 extra), 25 squats, 15 – Second wall sit, 10 push ups. 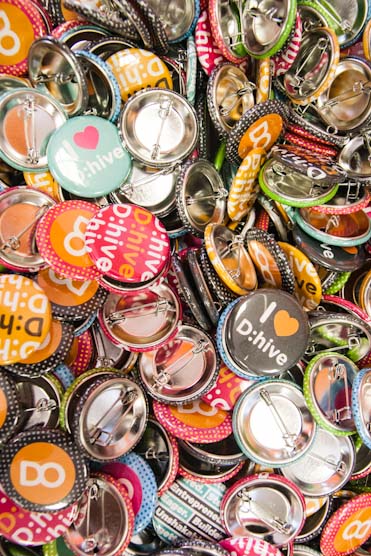 I got a late start yesterday for reasons beyond my control but around 4:45pm I headed out of the house to begin the days adventures. After a few U turns and sitting in traffic on Woodward Ave. (the annual fireworks were on the riverfront last night so many of the streets downtown were cut off), I found a spot very close to the D: Hive. I chose this as my first stop because I think that it is a great place to visit if you are new to the city or just visiting. The staff is very friendly and they have countless resources.

When I walked in the door I heard my name, but did not immediately know who was calling it until I removed my sunglasses. I was pleasantly surprised to see Quinn, a D:Hive employee and former middle school and high schoolmate. I told Quinn about the project and she led me to the restaurant, bar and shopping checklists that I was seeking and which would act as a guide to my adventures during the next month. After chatting about different things to do in Detroit and the said decline of trades because of the rise of status attached to college attendance, I was on my way to the next stop. 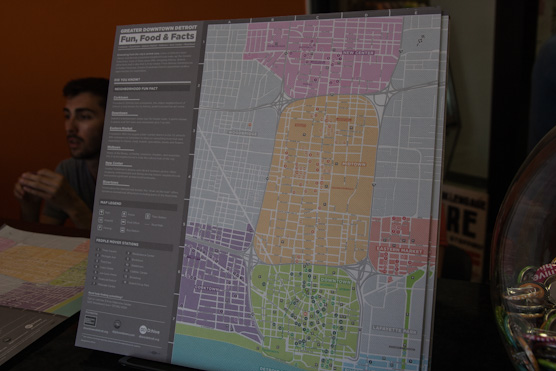 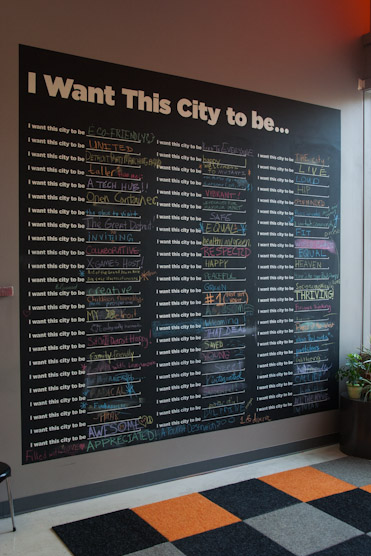 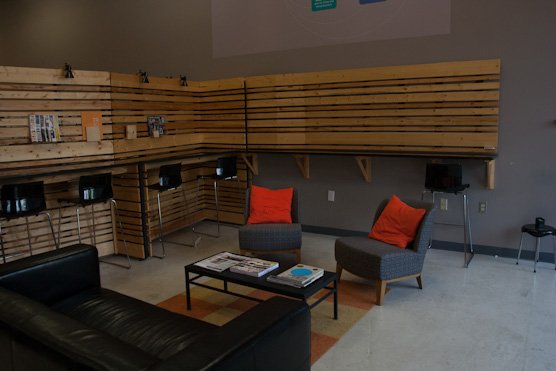 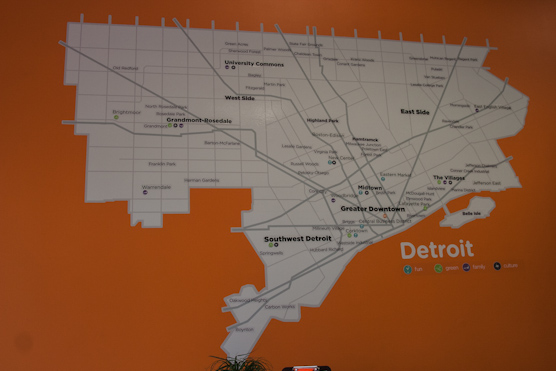 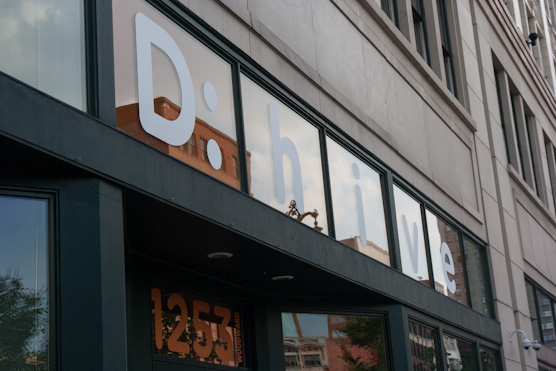 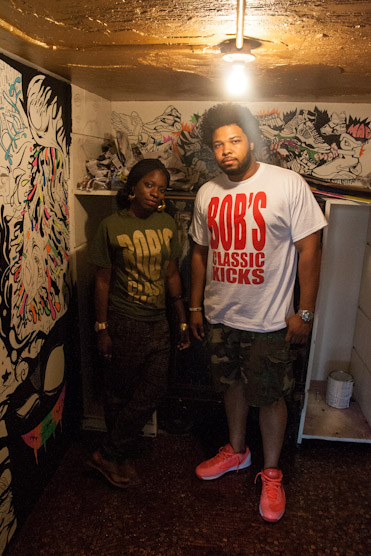 Yesterday morning I sent out 59 text messages to many of the Detroit residents that I have in my phone book. I immediately received a  response from Christian, a friend I have known since high school who told me to come to Bob’s Classic Kicks, so I obliged. After leaving D: Hive, I hopped in my car and headed north on Woodward Ave, to Bob’s Classic Kicks midtown address. It is very easy to find as it is located on the corner of Woodward and W. Forest.

Surprisingly, this was my first time inside of Bob’s, so I was slightly embarrassed when Christian told me they had been open for eight years. Like most sneaker shops, Bob’s has a very relaxed feel, it is one of those places you can just come and kick it with your friends with no pressure to buy. The shoes are nicely displayed and there are loads of t-shirts as well. the coolest feature of the shop is the recently finished vault which boasts a newly finished floor made completely of pennies. The vault will be used to display high end sneakers.

So if you are looking for new sneakers or just a place to hang out in midtown, stop by Bob’s and say hi to my friend Christian!! 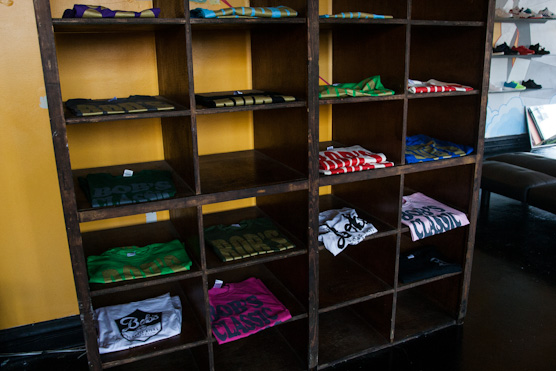 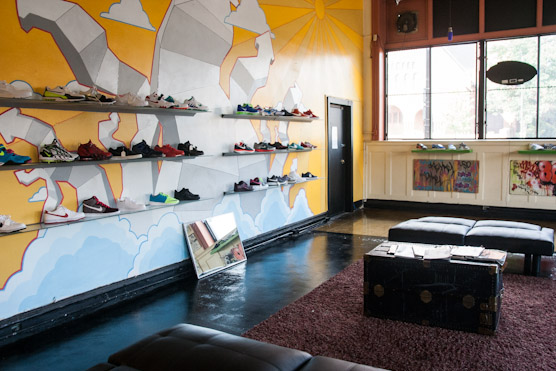 You may be thinking why was Whole Foods even on the list, but for Detroiters it is a very big deal!! This is the first Whole Foods in the city and it just opened to much fanfare on June 5th and I think in general, it is the first large national chain that has taken a chance on the city. After leaving Bob’s I headed the wrong way on Woodward then promptly made a U turn to reach Whole Foods, which was less than a mile away. I pulled into the almost full parking lot and headed inside. 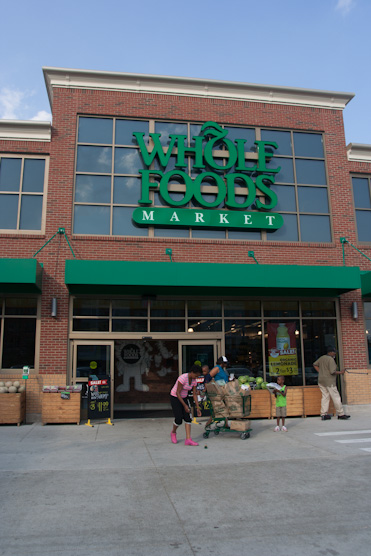 I love Detroit largely because I know so many people here and life can be a Cheers moment everywhere I go. As soon as I walked into the store I hear, “Hey girl!”. It was a dear friend of mine from high school, Dojsha. She also responded to my earlier text telling me to stop by the store, which was already on my list.

I had been warned that this Whole Foods is smaller than most, but it is still great nonetheless. I grabbed some Vanilla Coconut Almond Milk that was on sale, a bottle of wine for a party and a light snack since I was famished. One strange thing did happen while I was eating my overpriced shrimp skewer and corn cilantro muffin, a man walked up to me and said “Comment ça va?”, which surprised me but I simply replied, “ça va bien, et toi? He was not as quick to respond so I immediately realized that was the extent of his French. He assumed I was francophone African.

I will be returning to Whole Foods a number of times this summer, but will only mention it if I have super fun adventures, like riding around with my friends in shopping baskets through the aisles.

While most of Detroit was flocking to rooftops and the riverfront to watch the annual fireworks display on the Detroit River, my friend Theo and I headed over to Woodbridge Pub and enjoyed a few drinks and asparagus on the patio. Woodbridge is a common hangout as they have a good wine and beer list and a generally fun atmosphere.

The other patrons are always friendly and the staff is awesome. Vanessa, who was our server last night was eager to please and even sat down to chat with us at one point. Kate, another waitress, was very nice as well as conveyed through our short discussion about the ferocity of the mosquitoes in Detroit. The atmosphere on the patio in the summer is one that made me feel like I was sitting in the backyard of a friend’s house. It will take a lot of discipline not to return here too many times as there are so many other bars to see, but Vanessa informed me that they show movies in the garden on Sundays and they have brunch with bottomless mimosas as well. She also was kind enough to give me other suggestions of things to do around the city.

If you are looking for a great bar in the Midtown/Woodbridge area, be sure to stop by Woodbridge Pub and tell Vanessa I said hi!!! And P.S. the Portobello burger is yummy! 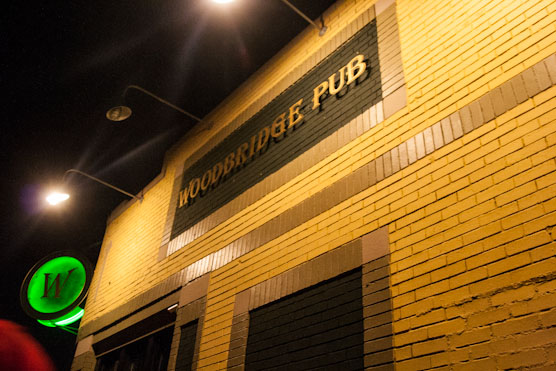 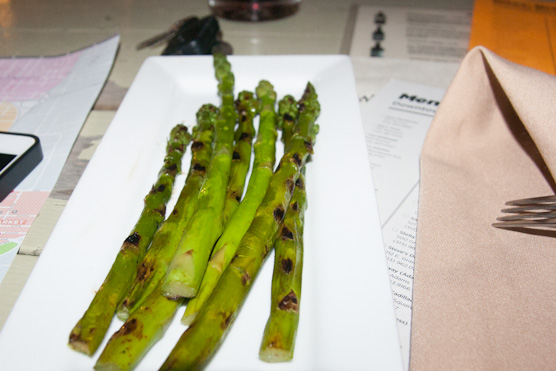 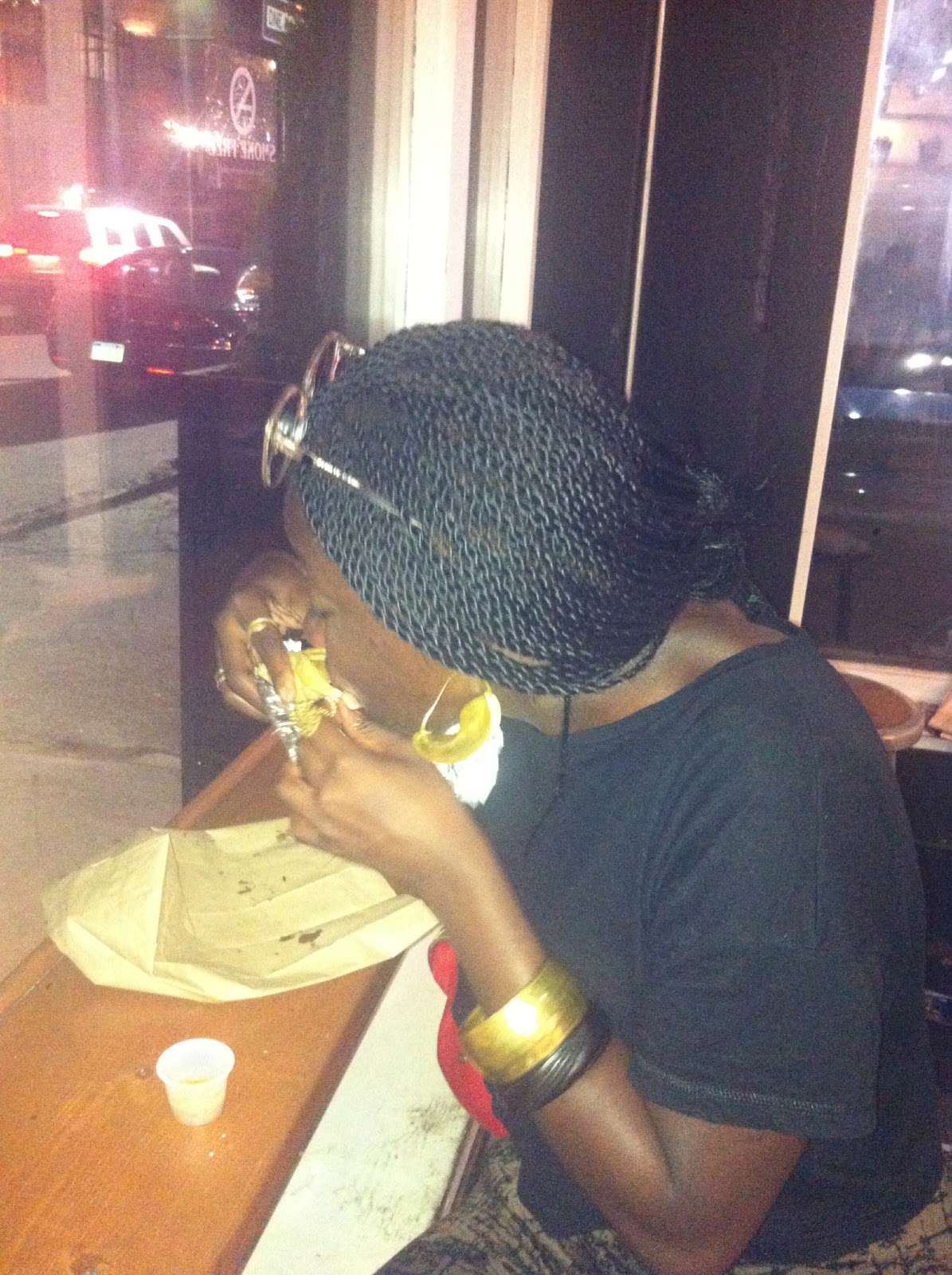 By the time we left Woodbridge I was pretty hungry as I hadn’t eaten dinner, and while my first thought was to get fried chicken wings from Coney Island, I opted for the healthier option of Hot Taco. Since I was first introduced to this place in April, by my friend Will, I have returned entirely too many times. The tacos are not amazing, but they are good, cheap and a healthier option for late night hunger pangs.

Located next to Centaur (another great bar) on Park Avenue, just behind the Fox Theater, it is a small establishment where all of the tacos are made fresh (read: sometimes you can wait for up to 15 minutes). Last night I asked the cashier for his recommendation and he recommended the spicy chicken. It was ok, but not really my type of thing. I always default to the fish and blackened shrimp and I am never disappointed. I usually go for the corn tortilla, but I had the burrito once and that is a good choice if you are really hungry. So next time you get a late night craving or a during the day craving, head over to Hot Taco. 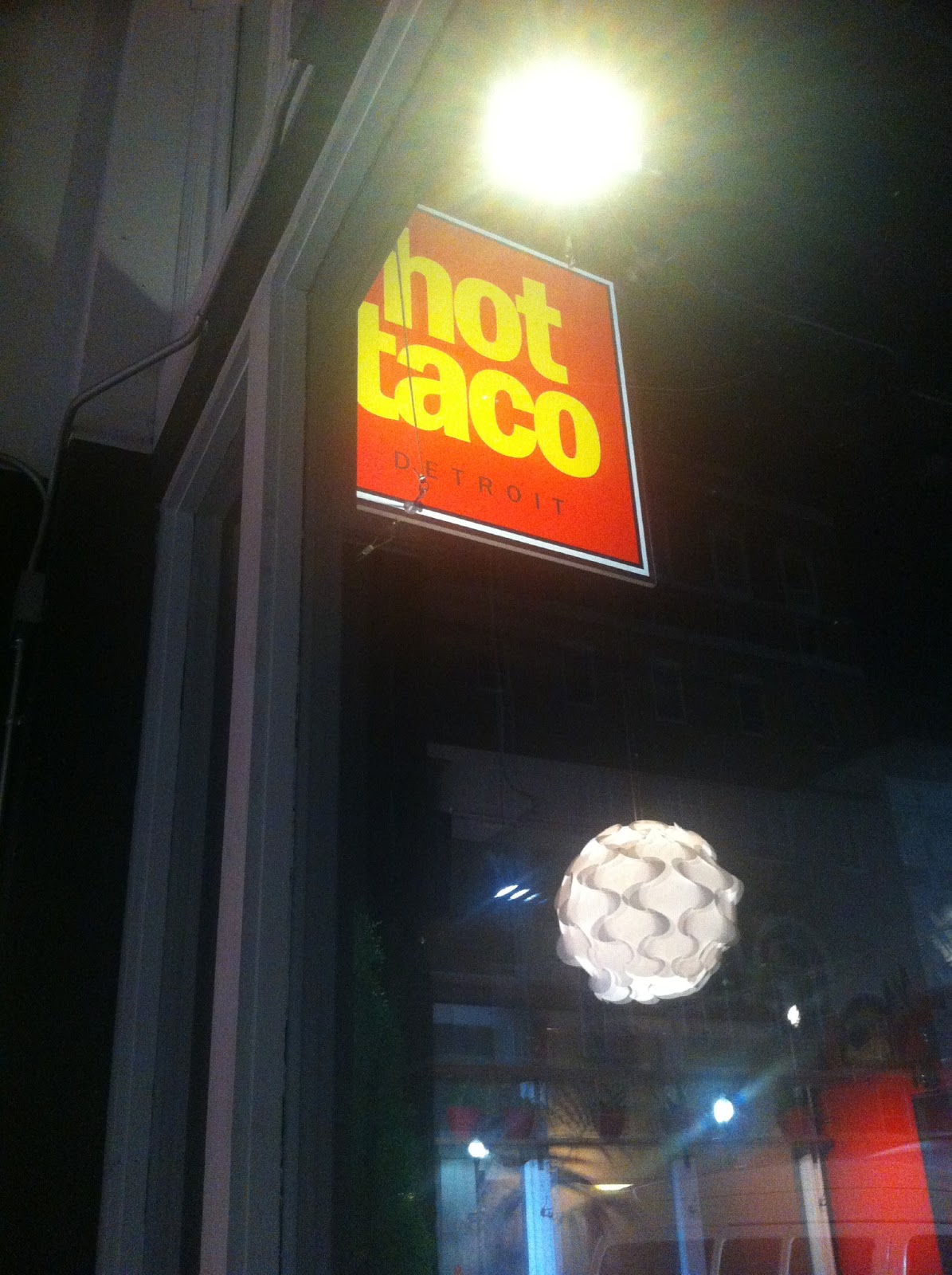 All in all today was a great start to my Detroit adventures and I am looking forward to many more. I spent a total of $57.50 (4 cartons of almond milk, bottle of wine, shrimp skewer, corn cilantro muffin, glass of wine, cocktail, asparagus, tip and two tacos). I will aim to spend less money on a daily basis, but not a bad start! If you have suggestions, please feel free to share them in the comments section.

Rise and Shine: 9:34am (it was very painful to wake up) Today's Forecast: Summer perfection…