On May 14, Jay-Z announced that he would be curating and hosting his first ever music festival in Philadelphia, Labor Day Weekend, Made in America. As soon as I heard the announcement I hopped on Whatsapp and furiously sent out messages to my friends in the US. Some were more enthusiastic than others, but it only took the commitment of one childhood friend to get more on board. Fast forward three and a half months and the weekend has come and gone. 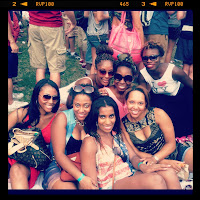 Crystal and I arrived Saturday morning, taking an early morning Bolt bus from NYC. We stayed in the Loews Philadelphia Hotel, the staff of which was kind enough to let us check in early. This allowed us time to rest and listen to all of the acts on youtube in order to write down the names and times of those that we wanted to see. This was one of the keys of the weekend as we had to move between stages.

We grabbed Philly cheesesteaks at the nearby Reading Terminal Market. It was a cool marketplace that had loads of options for precooked meals as well as fresh meats and cheeses, amongst other things. We brought our food back to the hotel and ate as we blasted music from the upcoming performers for the day and got dressed.

The first day was awesome. There were thousands and thousands of people and thankfully no rain. It was hot outside and coupled with the sunshine and incessant dancing we were all glistening (read: sweating like pigs). We got to the venue just in time to catch the Maybach Music folks, including Rick Ross, Wale and Meek Mills. Though they aren’t my favorite, I definitely enjoyed it. As did a fellow concert goer who must have been high on something because he was trying to dance with all of us and at one point knocked me down to the ground and fell on top of me. By 3pm, we knew this festival would be worth every penny. Following Maybach we watched Janelle Monae. I was more into it than most of the other girls, as they laid their blankets down in the middle of the crowd and sat down as I danced and sang my heart out. D’Angelo performed on the big stage as did a myriad of other people who quite frankly I wasn’t that into. Crystal and I even fell asleep at one point. I caught a glimpse of Jay Electronica while standing in line for food. He was a late addition so I had no clue that he was even there.

The evening really got turned up with the performance by Skrillex. Though we didn’t go to the stage where he was performing, the speakers near us played his music and the light show was on all of the screens. It was a great prelude to Jay Z’s highly anticipated performance. As we all knew, Jay Z had loads of surprise guests up his sleeve including Swizz Beats, Big Sean, Common, 2 Chainz, Pusha T, and of course, the one and only Kanye West. I am not sure if epic can express what this set was but I think it is the best word that I have to use. The show ended with the ever famous “Niggaz in Paris” coupled with fireworks and a champagne toast. It was then I knew every penny was well spent, even if we didn’t come back the next day. We were all a bit surprised that Beyonce didn’t perform though they did show her in the audience a few times. After the show we went back to the room and stopped for “water ice” on the way back. I am not sure what it is short of ice from heaven, but if you are ever in Philly try some! After a well needed shower, I went straight to sleep.