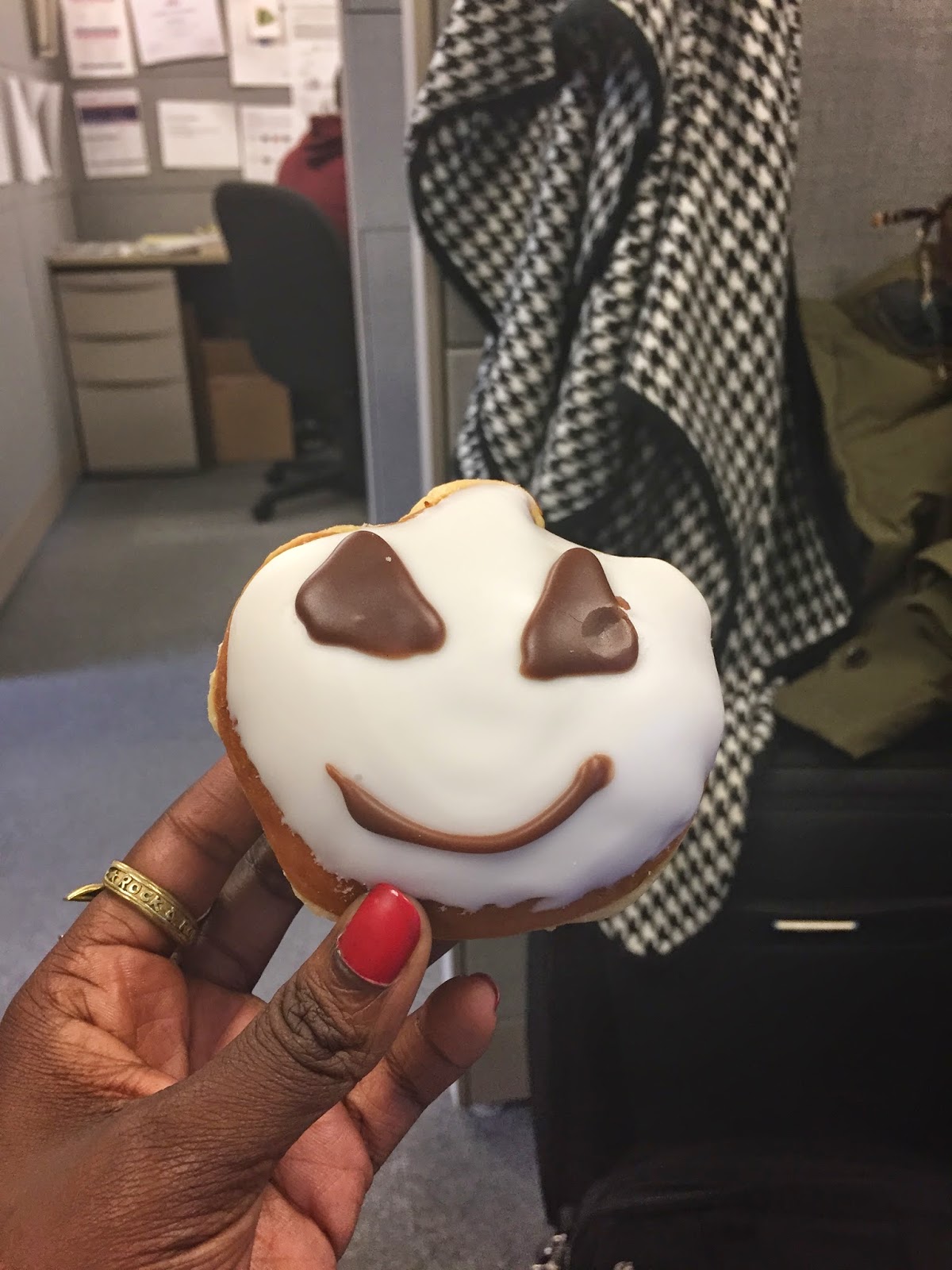 I have never really been into Halloween, not that I dislike it, but I have never been one of those people who thought about what costume I would wear more than one week before the 31st, if at all. This year, my first living in the US after a 6.5 year hiatus, I knew I would likely dress up. To push me a little bit more, my company had a Halloween party and a costume contest.

Being that I am quite the competitive person when it comes to contests and games, I knew I wanted to win, the problem was I just could not decide what to wear. I will admit, in typical fashion, I didn’t think about it until the week before, I was being indecisive and all of the choices on Amazon didn’t help. It was Thursday morning in the office before I finally decided on an Iron Man costume which required one-day shipping and a lot of finger crossing.

Luckily for me, my costume came Friday morning around 9:30am. As soon as it was dropped off in my cubicle I headed to the bathroom, threw it on, and asked a stranger to zip me up, because I couldn’t do it alone. I slathered some Ruby Woo on my lips which was the perfect addition to my red matte nails, to round out the outfit. 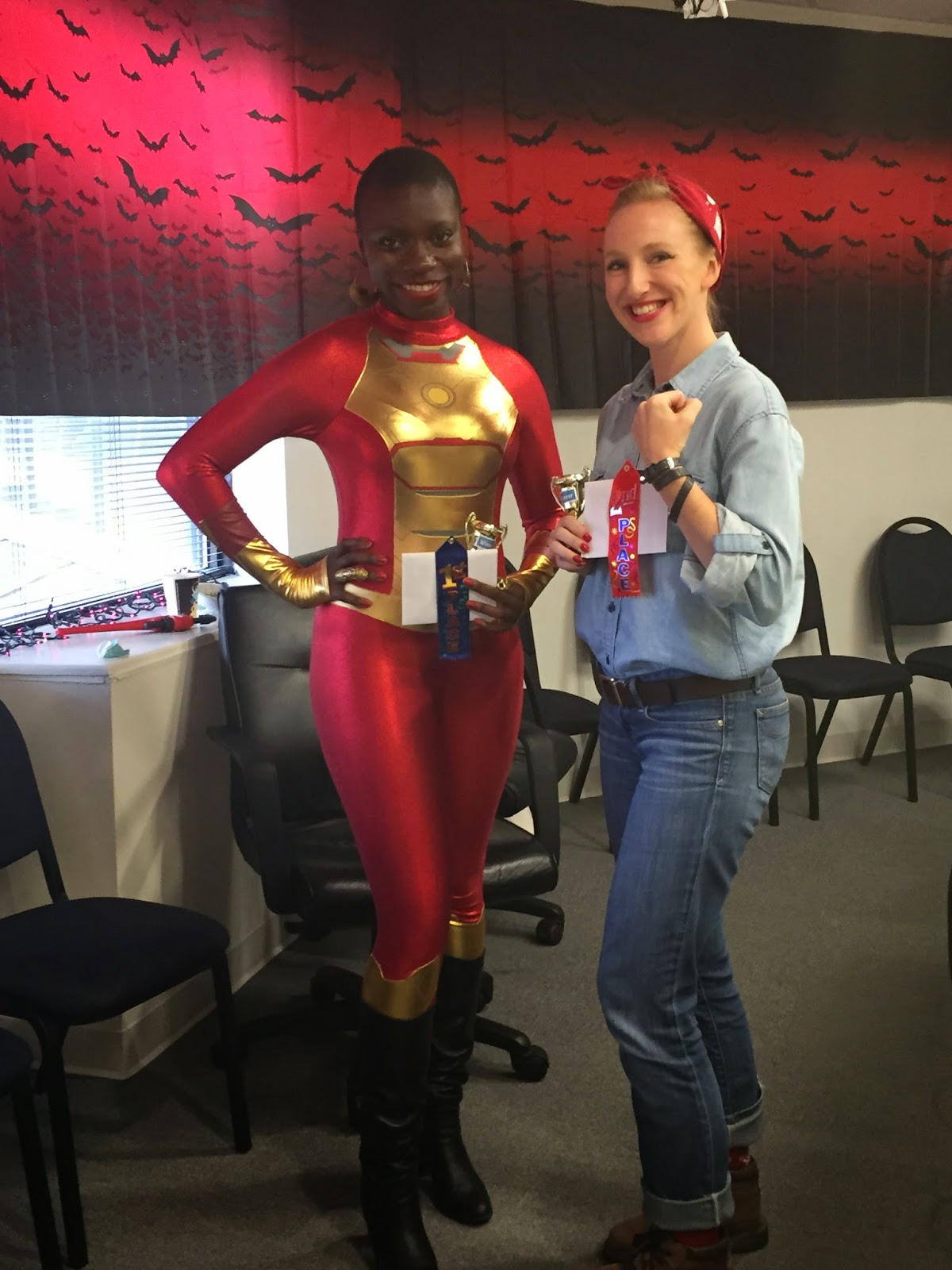 I will admit, I didn’t think it would be as tight as it was, it may have bordered on slightly inappropriate for the work place but it was all I had so I walked out of the bathroom, did a mean walk back to the office and everyone loved it. Many of the comments hinged on “you look great, I couldn’t wear that.” Needless to say, I won the contest for “Best Superhero” and I also won the overall contest for the most votes! My prizes were a bag of chocolate, a trophy and a $75 gift card!!! I was thrilled. 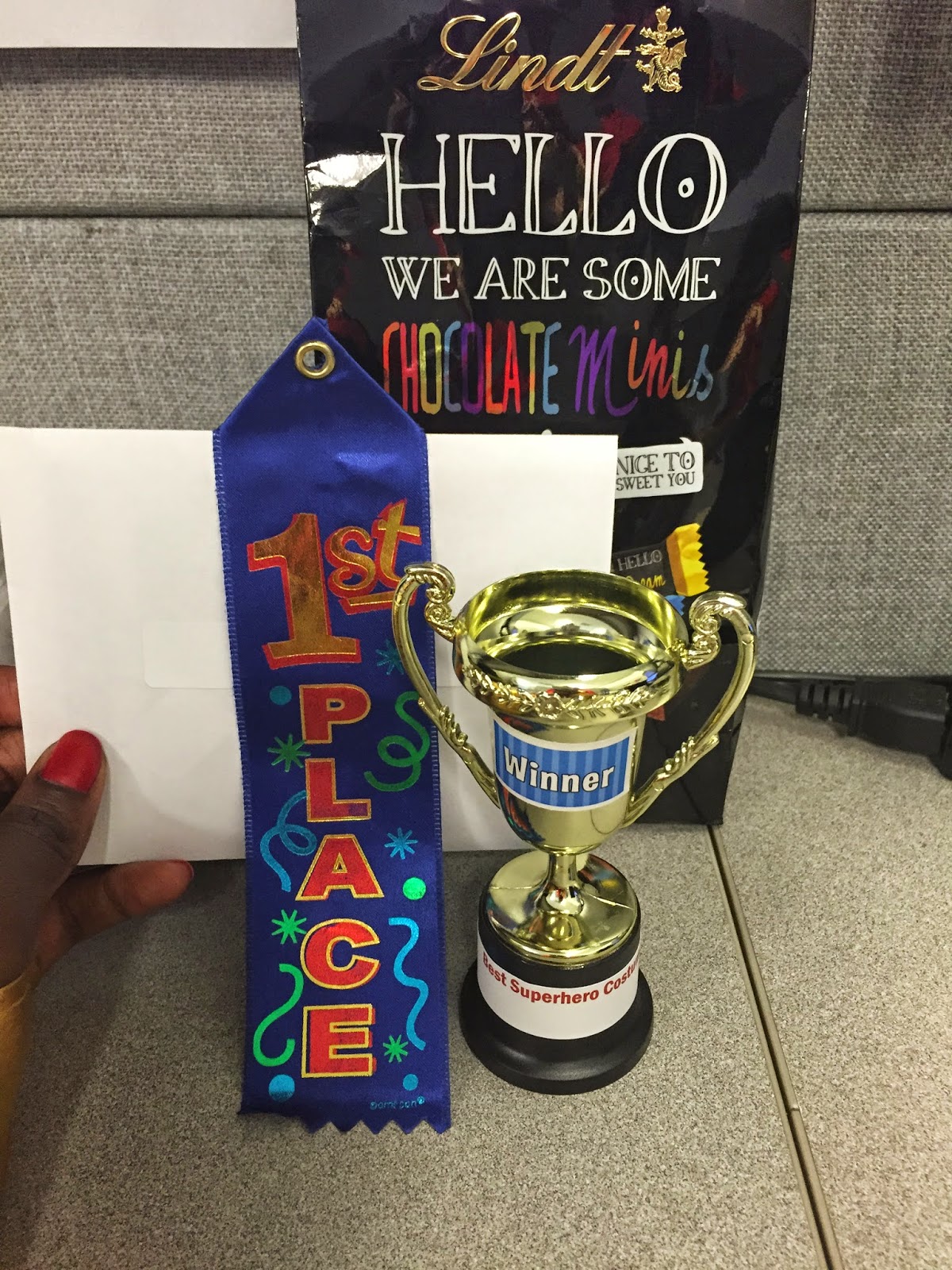 I was leaving work early yesterday in order to catch a flight to Detroit and everyone kept asking me if I planned to fly in my costume. Originally I planned to just take it off at the end of the day, but then I figured, why not. I was comfortable, save for me avoiding liquids because I needed a bathroom buddy. So I traveled in my costume and it was the best thing I have ever done. It was absolutely hilarious. 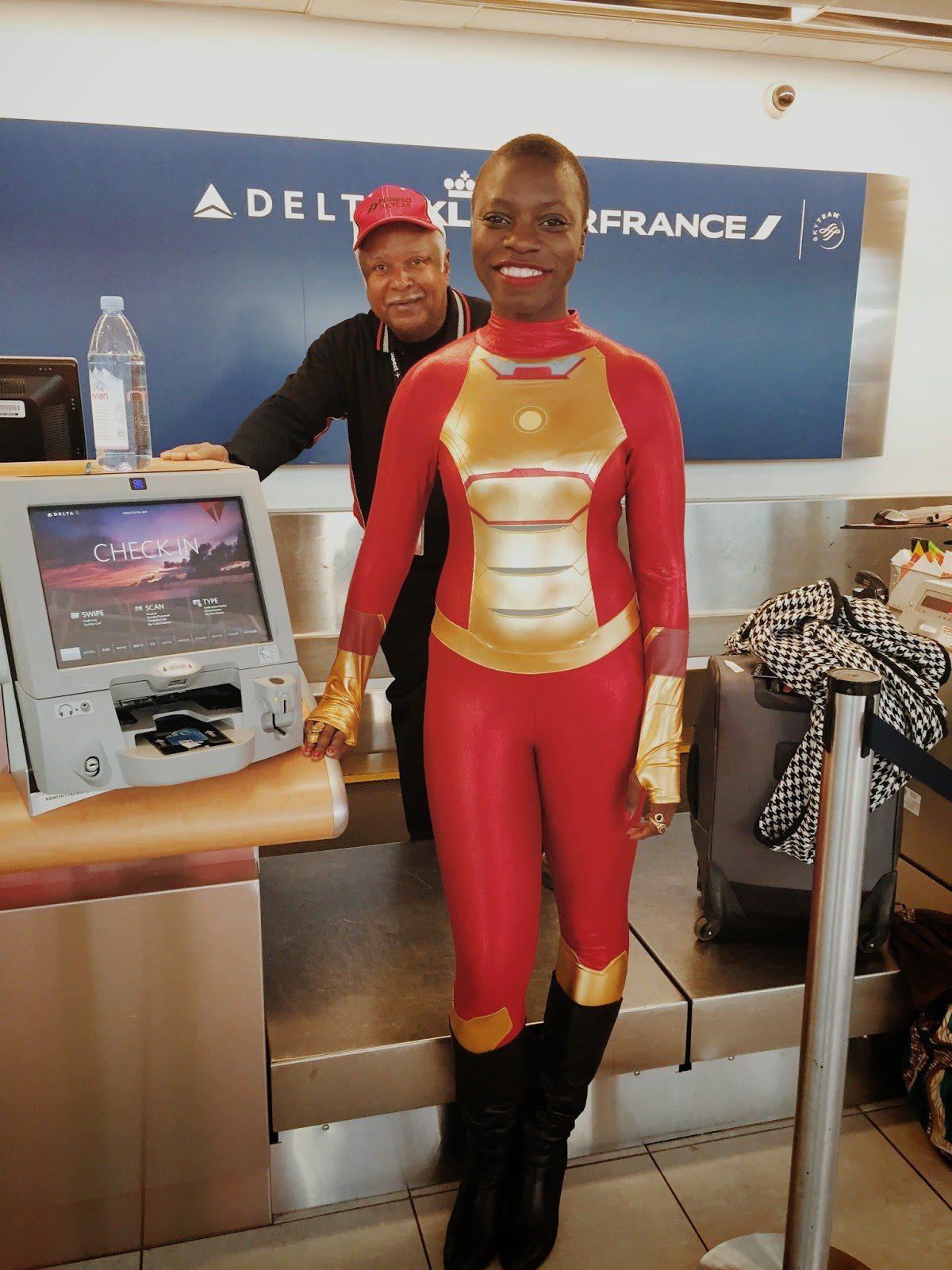 The shock and awe on people’s faces was enough for me. One man (fine man) even stopped me just to say he loved my outfit. There were a lot of laughs and a ton of compliments. When I finally boarded the plane, I asked if I could take a picture in the cockpit, the flight attendant asked the pilot and they happily obliged. The pilots were very kind, and one of them actually got out of his seat so that I could sit down and he could take a picture. 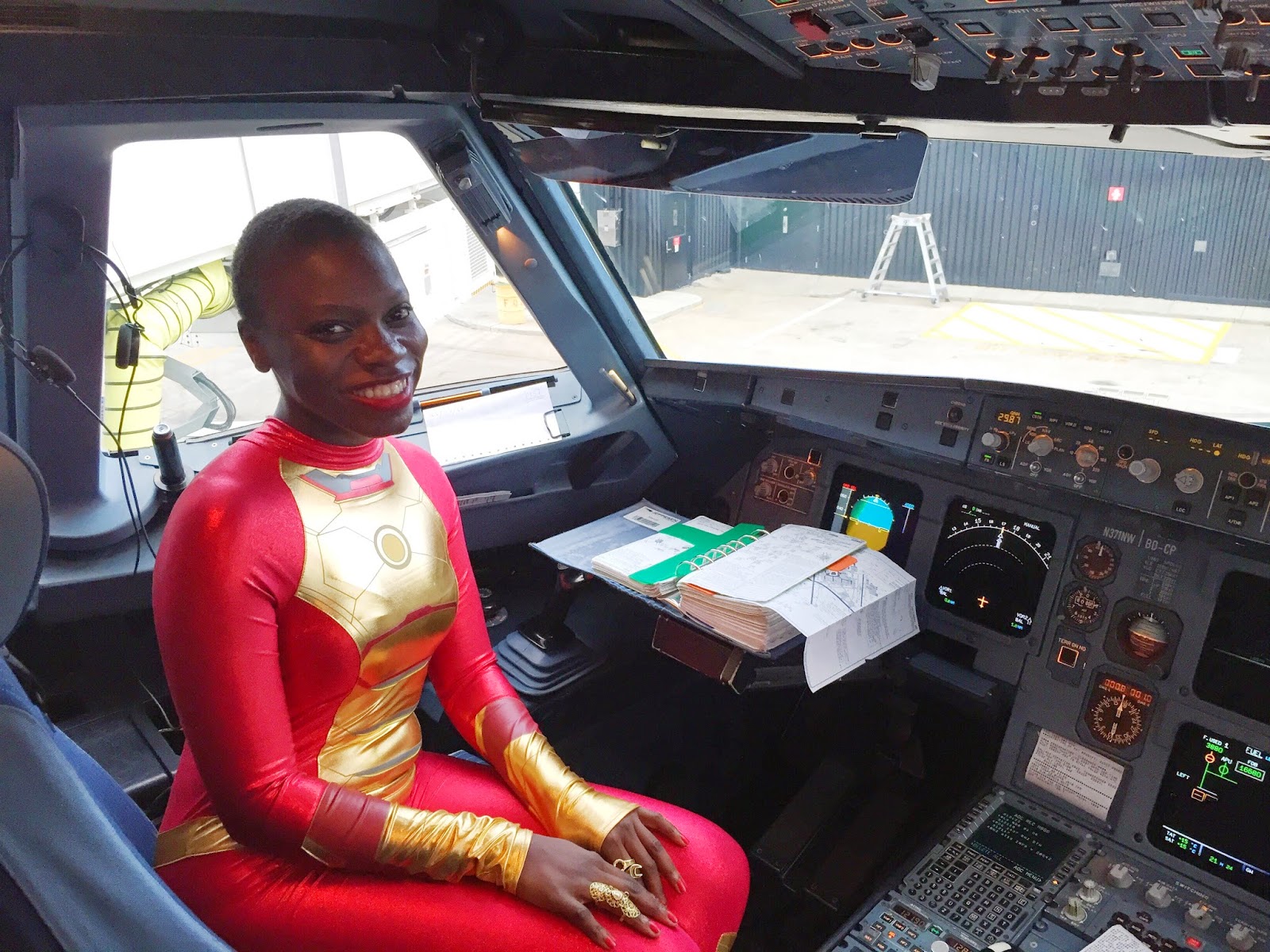 I spent about ten minutes in the cockpit as we chatted about travel and they showed me how the plane worked. I rounded out my visit with a selfie. Fun times on Delta airlines. 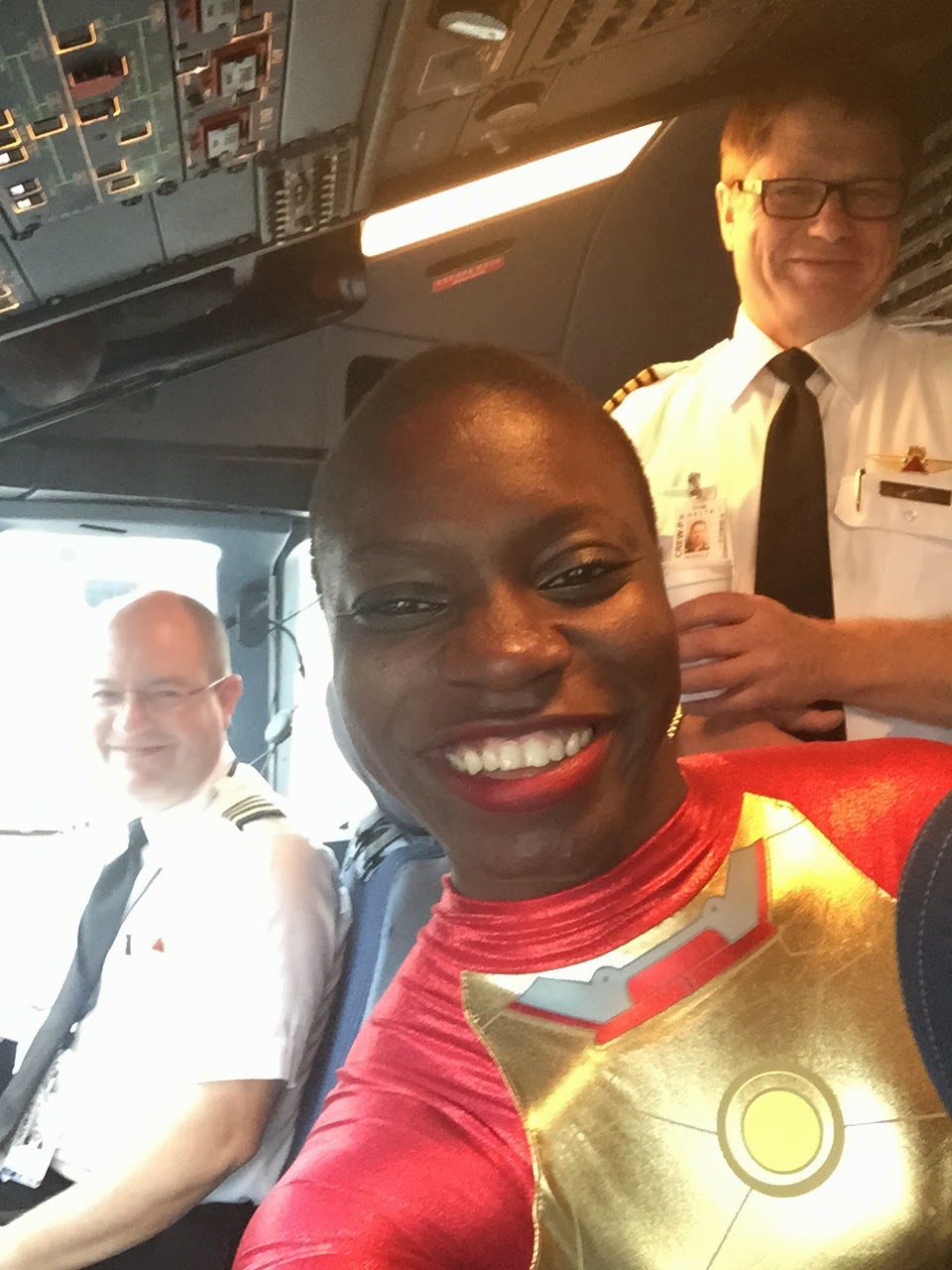 Now on to planning for next year. I think I will book a flight on Halloween just for the experience of traveling in a costume again!