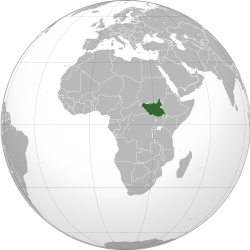 On the 9th of July, 2011, South Sudan became the world’s newest country. They officially seceded from Sudan after the passing of an internationally supported referendum in January. On the 11 of July, they officially became the newest member of the United Nations.

Yesterday I stumbled upon the first map that I’ve seen which reflected this new country.